The time has come to upgrade Groton Bridge Films to a website instead of a blog. I'll leave this up as an archive, but for the latest on our films, please see www.grotonbridgefilms.com
Posted by Erik Hammen at 4:42 PM No comments:

Time of the Robots was in Chicago! 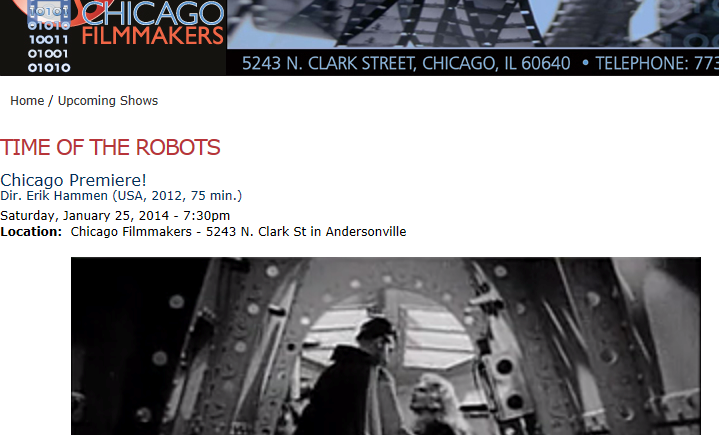 I recently learned that Time of the Robots screened at Chicago Filmmakers back in January, 2014.

They gave us two shows, one at Chicago Filmmaker's HQ and the other at Columbia Collage. Very cool!

Apparently it went really well, but there were some communication problems and I unfortunately only found out about the show after the fact.

But I love Chicago, they're nice over at Chicago Filmmakers (if a little scattered at the time) and they gave us a nice mention in the Chicago Tribune, check it out:


Here's the official listing on the Chicago Filmmakers website.
We also talked about possible future shows for my next film Beach Town!
Posted by Erik Hammen at 3:40 PM No comments:

Clips from Time of the Robots

Here are three clips from Time of the Robots, reposted for your viewing pleasure!

1. The opening three minutes of the film:


Time of the Robots - opening three minutes from Erik Hammen on Vimeo.

2. Marta escapes from the Phantom Planet


Time of the Robots - clip 2- Marta escapes from the Phantom Planet from Erik Hammen on Vimeo.


Time of the Robots - clip 3 - the Primordial Strike from Erik Hammen on Vimeo.
Posted by Erik Hammen at 10:20 AM No comments:

Join us Sunday October 20 for a screening of Time of the Robots at the TriCities International Fantastic Film Festival in the high-tech mecca of Richland, WA!

Click here for exact times and places. And in the meantime, to whet your appetite, you might just want to dig this clip from the film. It's entitled: Marta escapes from the Phantom Planet

Time of the Robots - clip 2- Marta escapes from the Phantom Planet from Erik Hammen on Vimeo.

Posted by Erik Hammen at 8:01 PM No comments:

Columbus Dispatch profiles Hammen and Time of the Robots

Nice little mention of the Time of the Robots story in today's Columbus Dispatch, getting ready for the Sci-Fi Marathon this weekend!!

Sci-fi fans to stay up all night at Drexel for their annual fix....

• Time of the Robots  (2012) is a mash-up of public domain silent- and sci-fi flicks by Seattle filmmaker Eric Hammen.

“I have a huge soft spot for old sci-fi,” said Hammen, 45. “When DVD started to explode onto the scene, there were so many of these old space movies and silent movies that became available. I tried to explain to buddies how great they were. .?.?. They don’t get the respect they should.”

Hammen came by his love for sci-fi as a child, staying up on school nights to watch late screenings of The Twilight Zone and Flash Gordon.

“By the time that was done,” he said, “my brain would be totally fried.”

“It seemed like such an interesting story, putting together this freaky film out of other films,” Hammen said. “I just love the audacity this guy had, and I see Robots as being an audacious movie as well.”

Married with two children, Hammen, a content producer and video editor, thought Robots would take about six months to complete, working on it in his spare time.

Instead, it took six years of writing, sorting through mountains of public-domain footage and creating title cards to finish the film.

Hammen, who played in a high-school punk-rock band, also wrote the soundtrack.

Other movies on the schedule include:

• Dr. Cyclops (1940): Albert Dekker stars as a mad scientist who miniaturizes those who threaten his work.....
Posted by Erik Hammen at 8:10 AM No comments: 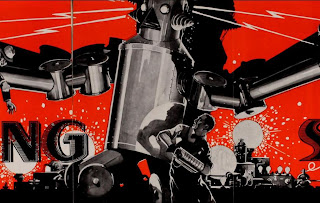 NEW SCREENING - MAY 2013
Time of the Robots is pleased to announce we will join 2001, a Space Odyssey; Attack of the Mole People, The Monolith Monsters, Inception, and more at the annual SciFi Marathon in Columbus! More details to come.

Round on the end and hi in the middle! O-HI-O!

http://www.scifimarathon.com/films.html
Posted by Erik Hammen at 8:43 AM No comments:

Time of the Robots in TriCities, October 2013!

Time of the Robots will be screening at the TriCities International Fantastic Film Festival in 2013. The festival runs through October.

Times and dates to come!!
Posted by Erik Hammen at 8:32 AM No comments:

Get updates as they happen

Erik Hammen
My latest film "Beach Town" (a rock and roll beach movie of the mind) is currently on the festival and independent cinema scene! Other films include: "The Last City in the East" (now available on DVD.) and "Time of the Robots," which continues to run on the festival circuit. Get more info at: http://grotonbridgefilms.blogspot.com